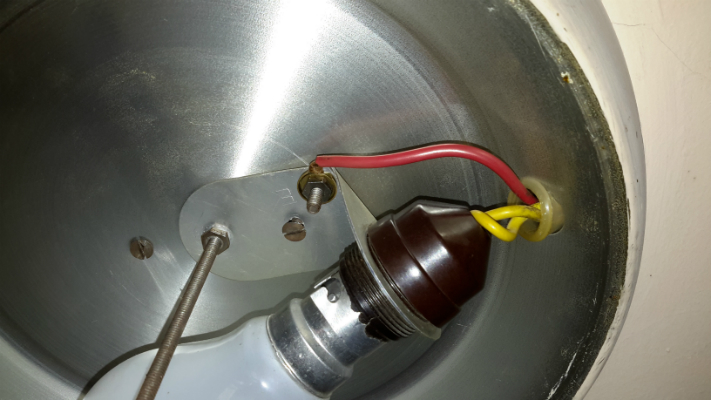 Doing Your Own Electrical Work Is Dumb, Dangerous and Illegal.

The photo above shows one of four lights installed in a Launceston property by a home handyman.

You can see that the red wire – the live wire – is connected directly to the metal body of the light.

If you were to touch the metal part of the light while changing a blown globe you would receive a potentially fatal electric shock.

Why would anyone do something like that?   The usual answer  –  to save money.

Yes it costs money to have an electrician at your house.  But by paying someone who knows what they’re doing you avoid putting yourself and your family at risk.

It’s not easy to get through an electrical apprenticeship.  It takes three years of study, and the exams are hard, with lots of complicated maths. The drop out rate is high.  You have to work alongside a qualified tradesman for four years to learn the right way to do things.

Not all home handyman electrical work is as stupid and dangerous as this example but it all has the potential to be.

The people most likely to be injured by dodgy home electrical work are the people who live in the home.

Unfortunately, any qualified tradesman who works on the dodgy wiring afterwards is also at risk.  Home handymen set traps for tradespeople who follow them by doing the unexpected.  By doing things that don’t comply to the widely accepted industry standards.

Electrical work is considered high risk and there are testing procedures in place to protect workers from unexpected faults, but the risks are greater when the electrical installation has been tampered with by someone who doesn’t know what they are doing.

The money saved by doing DIY electrical will seem insignificant after someone is injured or killed by the dodgy work.  Play it safe and always get a qualified, licensed and reputable electrical contractor to do your electrical work, no matter how small or simple you think the job may be.

Don’t risk your life and your home insurance.  Phone Mance Electrical on 6331 4711